“The OSC are extremely pleased to announce that the Gower Brewery will sponsor the OSC 2016/17 Player of the Month and Season OSCA’s.

The OSCA is awarded to the Ospreys player of the month as voted for by supporters on this website. The winning player is presented with an exclusive Grogg in the Riverside Bar post match (you can’t buy an OSCA unless you make Dan Bigger an offer he can’t refuse – he’s won 7 awards including player of the season twice in the past 6 years since the award was founded).

Established in 2011, Gower Brewery are one of the fastest growing breweries in Wales.  The brewery are well known for their award winning ales including Gower Power and Gower Gold. If you’re lucky and it’s not sold out, you’ll find Gold on tap in the Riverside Bar at the Liberty Stadium.

Matt Joslin, one of the directors of Gower Brewer said “We are delighted about the chance to support the Ospreys Supporters Club and make a contribution to a local sports organisation.”

As connoisseurs of beer, we can wholeheartedly endorse Matt’s words. Rugby supporters and a brewery – what a perfect match! 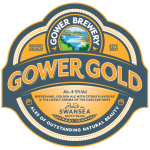 Click here to see the latest OSC Honours Board.