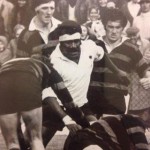 Amongst others, former internationals Nicky Little, Shaun Perry and (Ospreys favorite and all round legend) Jerry Collins have confirmed they’ll turn out for the Matavesi XV.  Welsh international Andy Powell will also be there!